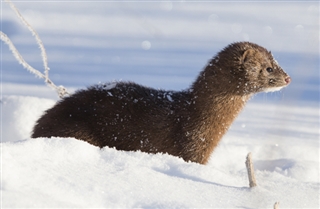 Fur farming has been illegal in the UK since 2000, but government figures show the UK imported almost £75m of fur last year alone.

Now some insensitive designers are turning the fashion clocks back and real fur is beginning to trickle into the shops and be displayed on the catwalks at Fur Fashion Week.

We are dismayed to see fur creeping back on to the high street, despite the Lynx campaigns in the 1980’s and 90’s. Once the general public became aware of the cruelty inherent in the production of fur garments, they shunned the industry and the people who wore them.  It seems that most people now believe that fur is a thing of the past (even fashion house Gucci says ‘fur is no longer modern’) and that the fur that is being used is all fake. This is not the case, and even some trivial items like the fur bobbles on woollen hats can be real. Some real fur is also being mislabelled as synthetic, and even some fake fur has been tested and found to have real fur combined with it.

Fake fur is environmentally unsound, but so is the real thing, (in addition to the inherent cruelty and disrespect). The animal is raised solely for its fur and the rest of it is simply discarded.

The animals mainly being ‘farmed’ for their fur are fox, rabbit, mink, raccoon and chinchilla.